Hope everyone is having a great weekend so far!

This is our 3rd crossbreed art release! 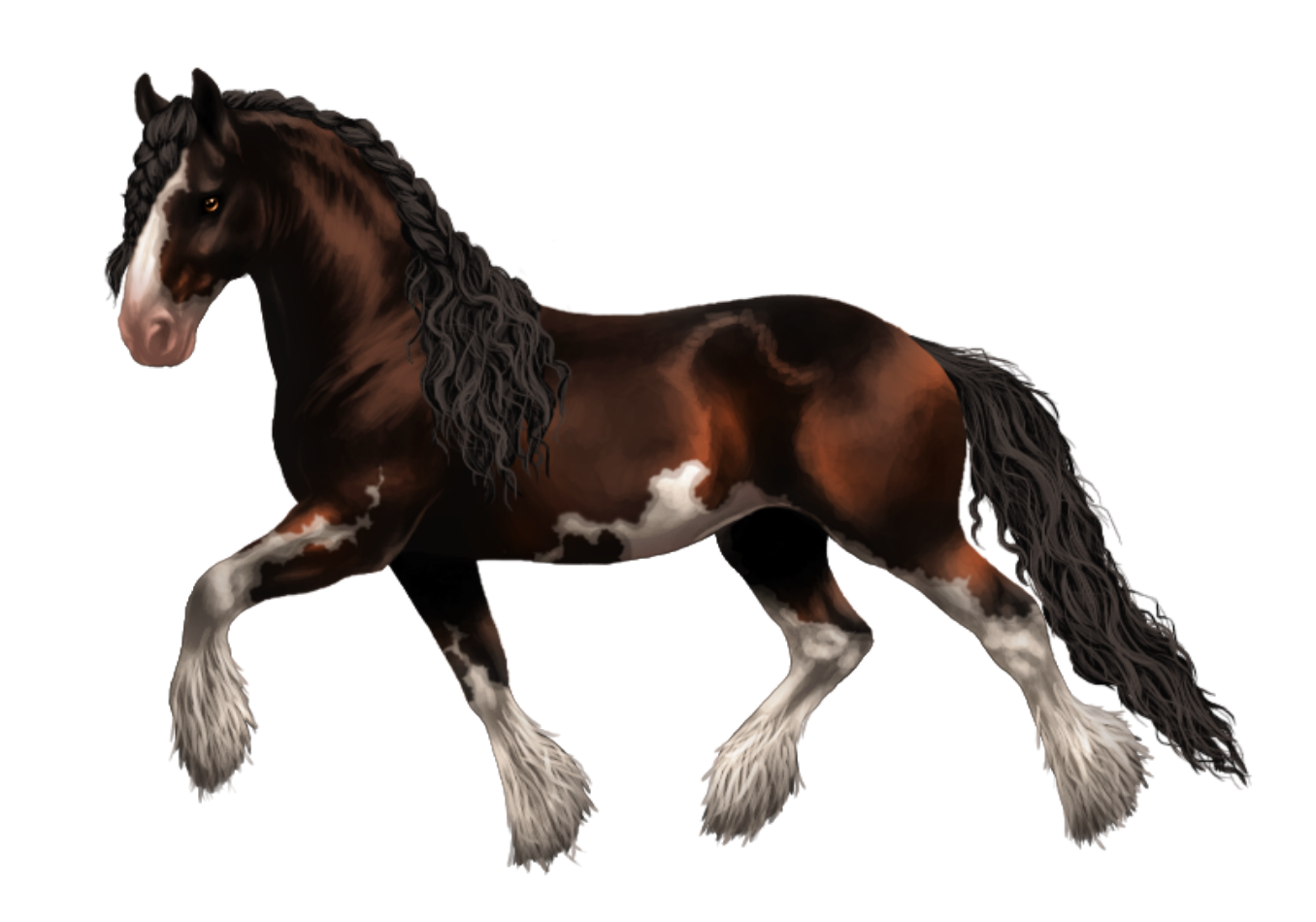 The Irish Draught and Norwegian Fjord are running neck and neck in the polls so we’ve extended a tie breaker poll until Monday or Tuesday.

Optimization, Next Breed, and Bug Fixes!

This much needed update focuses on optimization rather than a lot of new features.

Some of the horse data storage has been restructured so that horse pages can load faster as well as any lists of horses such as in dropdowns. Please let us know if you find any new bugs here.

Also, let us know if the speed of Eqcetera speeds up for you after the update and if you see any more of those gross server error pages.

Vote for Next Breed

While we do still have many crossbreeds left to do art for, if we only focused on crossbreed art, there would be no new breeds added to Eqcetera over the next 5 months. We’re trying to alternate between the two so that something new is coming at you at least every once in a while. ;P

This is the first breed vote we’ll have for Eqcetera! Every other breed added has been a surprise. We decided to look at the horse types we have and saw that draft breeds could use a little attention. In the Poll Center, you’ll find a poll with 4 draft breed options. Vote for your favorite so we can decide what to add next!

Unfortunately, I found a small bug with how white markings were being generated based on their possibilities. This has now been fixed! You may notice moving forward that some markings are more rare because they are going off their actual percentages. Also, no more unacceptable white markings for Friesians. :D

Presidential elections are (belatedly) now open for breed associations. I’ve also fixed horse entries where you can now enter horses into them. Whoops.

You can now spend referral points by clicking on your name in the top right corner then “Referrals.” You’ll see a t-shirt in there now! This is the first piece of merchandise for Eqcetera. You can also purchase money, credits, and Magic Horse Tokens. More items will be coming soon!

Your referral number never goes away. However, you can only spend the number of referred accounts you have accumulated. You’ll see your referrals and points available to spend on the Referrals page.

I’m sure you’re tired of hearing reminders about infinite upgrades going away, but they’re going away soon! This means they’ll not be available for purchase in the credit store in the future. They might come back for a to-be-planned annual charity event, but they will never be for regular sale in the store again.

Why are they going away? The plan was always to have a cheaper subscription option. Starting in early November, you’ll be able to subscribe monthly through Paypal for $4/month (price subject to change based on feedback but Paypal fees have to be considered). It will be an automatic subscription that you can cancel at any time through your account settings page. This will just be another way to pay for the 1 month option at a discount (1 month is currently $6 USD).

The awesome thing about subscriptions is that they will guarantee some income for the game every month. We currently have to rely on getting in new players who are interested enough to purchase an upgrade or some other purchase to be sustaining in the long run. Growing a subscription base will ensure art will always be at least partially paid for. :D

Due to all the server errors that have been popping up lately, I've been looking at doing some database optimizations. I'm hoping to push this live tomorrow night but it'll have down time associated with it. Down time could last for an hour or so.

Happy Update Day! Even if is Sunday instead of Saturday… this update took a while to test.

Here are a few of the colors to be on the watch for:

In addition to the new base colors, there is now a cream overlay which allows for other colors like:

A few colors now have new color names and due to new image layers and bases!

New white markings have been added!

Horses now have more greying stages. Foals will have their solid base only for age 0. At age 1, they will start to have a slight grey tone. Adults from ages 2-4 will show a greying stage like what is below..

A 2-year Mustang changing from bay to rose grey.

And finally, horses have shadows!

To celebrate all the new colors, we’re going to have a short breed coin sale for 50% off. It’ll last until Wednesday at 8 pm EST/game time.

Also, don’t forget that infinite upgrades will no longer be offered as an upgrade option in a couple weeks!

A couple of things have changed with shows.

First, points are now recalculated. Like with any update to showing, this may need tweaking.

Without getting overly complicated in the explanation since there is math involved, I’ll try to break down how points are now calculated. First of all, places 1-20 still earn more points based on the number of entries and show tier the show is in. Secondly, all other places are based on how many horses you defeat. Lower show tiers give less of a bonus here and there is always a base number of points even if you didn’t defeat any horses. If you’re confused about this, feel free to ask questions and I’ll be happy to answer them.

Second, the day has come from the show purse to be more limited. Money from show creation has greatly inflated the economy, and we want to tone it down to be more realistic. From now on, the percentage of the show purse has been halved. It is also capped at 5x the show fee.

Addition: I forgot this the first time around. Levels have been slightly recalibrated to require a little more points for each level. The reason for this is that it will be easier to gain points and since training boosts also depend on this, we don't want too fast of level gaining.

To help counter the loss of some of show purse, there is now a location in the World called the Whispering Crater. If you’re feeling generous, you can toss a stone into the crater for others to find. The goal of this location is to allow players to spend money (and get EXP in return) and allow poorer players to gain money. This can potentially be the source of income you need if shows don’t make you enough money and your horses aren’t showing well.

Player-made associations are now called clubs. You can now change your club rules after you create the club. Rules include selecting multiple pure/cross breeds and/or associations. Hopefully this allows for clubs to be more flexible.

White markings can now be inherited from the stallion. It looks at markings from both the mare and the stallion when breed, and still has the same percentage changes of 50% nothing, 25% inheritance from parents, and 25% random.

Since it’s the first of a new month, here’s a special update regarding various contests. :3

This month’s special breed is the Quarter Horse. Like the past couple months, we’ll still have the forum post to enter your horse in the contest here. However, one difference this month is that these horses will be manually added to the Hall of Fame so you’ll be able to keep track.

Next month, there will be a special page where you can add the breed yourself.

Congrats! Prizes have been sent. :D

Side note: Rabicano was just relased in Quarter Horses.

You’ll notice there are now two different ranks on your player profile, one for lifetime RP and one for monthly RP. From now on, there will now be two monthly RP contests every month - one for upgraded accounts and one for basic accounts. The prize of a Magic Horse Token will automatically be rewarded at age rollover (1 AM) on the 1st of each month and the RP count will reset.

Players now earn +1 RP for every 6E foal they breed. More ways to gain RP will be considered in the future.

Instead of having a referral contest that only lasts for one month, we’re going to be implementing a Referral Shop. You’ll notice that the referral section of your account settings has moved to its own page under your user menu.

The shop has not yet been implemented, but we have some ideas. One of them is a limited edition t-shirt. :o If you have any ideas on referral prizes, let us know! We want you to be motivated to spread the word about Eqcetera.

For the first 7 days after a player has joined, they will see a link in the menu to a Newbie Guide. This is a basic guide for getting started and should hopefully fill in any gaps in the knowledge needed to immediately start playing the game.